Some time ago we had the pleasure to test the Super Benek plant litter and this time I prepared for you a review of another product of this brand – an organic Odor Absorber.

Super Benek is a Polish brand known for litter for cats, but they offer also feeds, neutralizers and odor absorbers, and even shampoos. The Super Benek odor absorbers from the organic line are made from natural, plant ingredients.

We tested organic odor absorbers in two variants: natural and citrus. We used them with Super Benek Corn Cat litter and with plant-based litter from other manufacturer.
Methods of application:
– Sprinkle a small amount of absorber on the surface of the gravel in the cuvette, then lightly shake the litterbox so the powder moves to the bottom of the box.
– Sprinkle the dirty place with an absorber and then collect the dirt after a short time.

The results of my tests

Efficiency of litter with the absorber

I have to admit that I did not expect this, but the absorber significantly increased the efficiency of pebbles. In addition, not for two or three days, but up to 12 days!

Absorber in the litter box

Both of the cat litters that I am using absorb the unpleasant odors in the litter box quite well and I clean the litter box everyday, but when the droppings get to my litter bin, things didn’t look good. This is where the odor absorber comes in! The absorber mixed with gravel meant that there was no smell of excrement from the bin even after a few days (I throw away the mixed waste bin once a week).

Absorber outside the litter box

I also had the opportunity to try the canister outside the litter box – but not because Apollo does it outside the litter box. My cat has a very long fur and sometimes droppings get caught in them, and detach when Apollo is running around the apartment (these are the realities of life with a long-haired cat). Which results in unplanned and unconscious “bombing”. While testing the Super Benek Odor Absorber, I sprayed both droppings and the surface on which they fell. I have to admit that it effectively eliminated all smells.

The smell of the absorber

The natural variant smelled pleasant and cornish. It suited both me and Apollo, so it was ideal for use in the litter box.

When it comes to the smell of citrus, it’s not always clear how the cat will react. Some cats do nothing about the citrus scent, while others are unable to bear even a delicate citrus note. While testing this product, I discovered that Apollo definitely belongs to the second group. For me, the citrus scent was really pleasant and refreshing.

The Super Benek Odor Absorber effectively neutralizes unpleasant odors. In addition, the product increases the efficiency of my cat litter by almost 2 weeks, which made a very good impression on me. I really liked this product.

Products absorbing or neutralizing odors were created for one purpose: to mask the unpleasant smells of cat excrements inside and outside the litter box.

The main causes of the problem with the bad smell in the litter box are: too rare removal from waste from a cat litter box, poor cat health and bad diet. If freshly made droppings have a strong, repulsive smell, be sure to visit a veterinarian with your cat.

In addition, cat owners often reach for products that absorb or neutralize odors when their cat gets out of the litter box. The absorber can cope with the unpleasant smell of excrement, but you have to deal with your cat’s problem – because getting out of the litter box is just a call to you for help.

When your cat gets out of the litter box, go to the veterinarian with the cat. If health causes are ruled out by a doctor, consult a cat behaviorist. 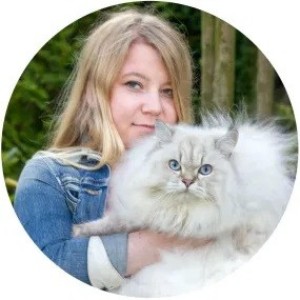 Welcome to the Apollo Fluffy Cat blog. I am Joanna and together with my fluffy cat Apollo, I create this blog to share knowledge about responsible and eco-friendly cat care, healthy nutrition and cat wellness, travel tips, DIYs, reviews of products for cats and their owners and more!

How to make jerky treats for dogs and cats

My blog was featured on the Top 100 Cat Blogs

There is no ESCape 💻 Jak widzicie Apollo pomaga